Who likes us, who doesn't, and who doesn't even know which street we are on

Gallup have been doing some polling of all humanity, or at least a fairly large representative sample thereof, enquiring as to whether they approve or disapprove of the job performance of the leadership of various countries, including my own, my native land.  So that is what I am going to focus on.  Polling times varied across countries, so some will have been expressing opinions of the Colossus of Kirkcaldy is he is not known, and some of the Cameron/Clegg duumvirate.  And perhaps some will have been thinking of the Saxe-Coburg-Gotha Battenbergs.
Anyway, onwards - starting with Africa: 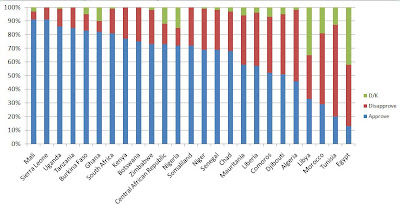 Gallup claims that some 91% of Malians and Sierra Leoneans have a positive view of our leadership, which is nice - if not exactly credible.  It would suggest that most of the population of those places has a subscription to The Economist / Le Monde Diplo and is otherwise glued to the World Service or CNN.  I cannot find a figure for UK aid to Mali, which doubtless does exist. Egypt and Libya show rather more credible 'don't know' figures at over 30% in each case.  Equally, they are not among our biggest fans in Africa, with high disapproval figures.  By and large, the strongest disapprovals correlate with Muslim majorities, bar Liberia.  I do not know what we've done to upset them.

Advancing to the Americas, Canada, the US and Chile view us with the highest levels of favour,but note the still high levels of hostility or unawareness.  Haiti would appear to be the most hostile in the Western hemisphere, outdoing Argentina - the one place known to have a beef with out foreign policy.  Nicaraguans are the least able to summon an opinion, followed by Guatemala.  The 30% approval rate from Venezuela suggests that not everyone is singing from the Chavez hymn book. 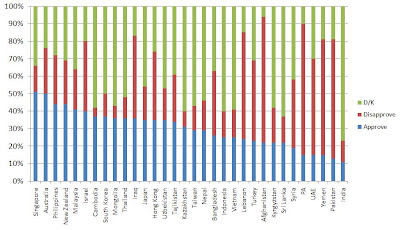 In Asia-Pacific, five of our six bestest friends are former parts of the Empire,with the Philippines the interloper.  Indians are the least able to muster an opinion, less so than - inter alia - Kyrgystan.  I doubt that the Bishkek Bugle carries much UK news, but what do I know?  Unsurprisingly, it is Muslim majority countries which are least favourable, led by the 75% for the Palestinian Authority. 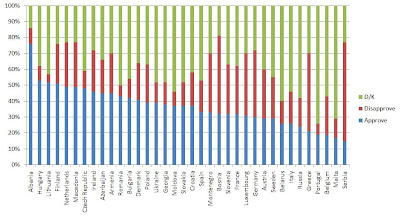 Bringing things to a close with our own backyard, Albania and Kosovo (omitted from the chart in error) approve the most whole-heartedly, while other participants in the Balkan wars take another opinion - not much love lost between us and the Serbs and Bosnians.  Note also the hostility of the Germans and the Greeks.  The Portuguese and Maltese find it hardest to come up with an opinion.
Posted by Quizzical Gazer at 03:02

Email ThisBlogThis!Share to TwitterShare to FacebookShare to Pinterest
Labels: surveys