Far too good not to broadcast

This, from a South African news site, and deserving of a narrower audience:


"Gauteng MEC for Local Government and Housing, Humphrey Mmemezi, used his government-issued credit card to buy an artwork worth R10 000 from burger chain McDonald’s. The initial transaction was disguised to indicate the buying of R10 000 worth of burgers. The R10 000 would buy 256 Big Mac burger meals with large chips and a Coke at R38.95 a piece".(MEC is the equivalent of MSP/AM etc).

At the risk of spoiling the story, it would seem that Mr Mmemezi was not acquiring one of those panels showing Ronald McD fighting off Hamburglar, but rather laundering through the joint's business bank account.

Email ThisBlogThis!Share to TwitterShare to FacebookShare to Pinterest
Labels: Crime and punishment


Mr. KING asked what number of claims arising out of telegraphic cables cut in the West Indies were preferred against the United States Government as a result of the Spanish-American war; how long a period elapsed between the presenting of the claims and their final settlement; and what was the total amount of compensation paid.
§Mr. ACLAND As far as I am aware, only two such claims were preferred against the United States Government, one by the Cuba Submarine Telegraph Company and one by the French Cable Company. That of the Cuba Submarine Telegraph Company was presented in November, 1899, but no compens

Read more »
Posted by Quizzical Gazer at 06:07 No comments:

Email ThisBlogThis!Share to TwitterShare to FacebookShare to Pinterest
Labels: 1912, hansard 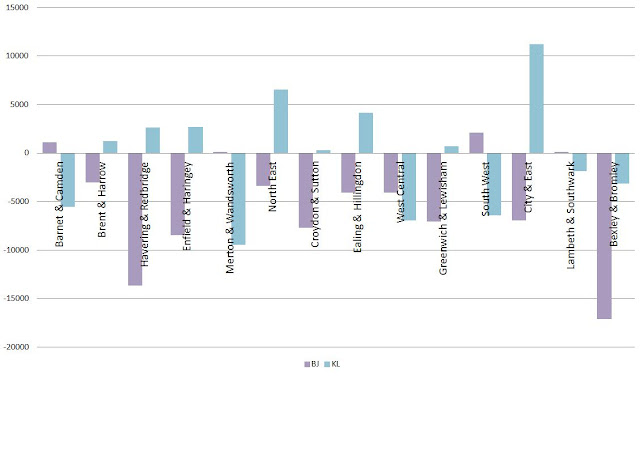 Boris gained a small uplift in Barnet & Camden, where Livingstone fell back.  I think that certain hateful comments about Jewish Londoners did KL no favours.  Boris got his biggest upswing in my own haunt of South West.  Set against that, note the heavy falls in the Boris vote in Bexley & Bromley and Havering & Redbridge.  I'm putting this down to the bone-idleness of Tories in the eastern outer 'burbs rather than anything else.

Posted by Quizzical Gazer at 02:42 No comments: 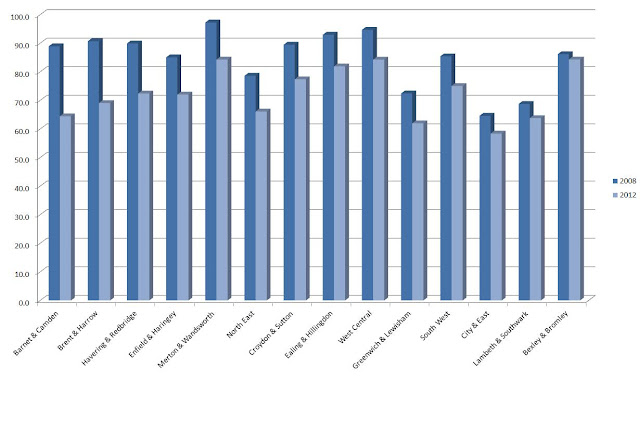 The Front National's vote share - it's a bit more complicated....

Judging from news websites and the Today programme, the second lead story on the French presidential election is that Marine Le Pen's Front National scored its 'highest ever share of the vote', at 17.9%.  And in strict terms that it is true, if somewhat misleading.

A little digging in the 2002 results shows that there was a split in the FN vote between the old poujadiste's original FN, and the Mouvement National Républicain, which split from the FN in 1999.  Le Pen polled 16.86% in 2002, while the MRN polled a further 2.34%, for a combined 19.2%.  While the MRN is / was a tad more respectable (so to speak) than the FN, there cannot be any serious argument but that the two parties were fishing in the same pool.

Email ThisBlogThis!Share to TwitterShare to FacebookShare to Pinterest
Labels: France, fun with statistics

Your cut out 'n' keep to London's least talented electorates

Those nice people at London Elects have been kind enough to make ward level data from the 2008 Mayoral / LA elections available, and turnout and vote share maps having been done elsewhere I've had a go at doing spoilt ballots, council by council.

At the other end of the scale, two out of 1,312 City of London postal voters made a hash of it (0.15%), while the most talented polling station visitors were to be found in Kensington & Chelsea's Royal Hospital ward where 99.43% got it right.  Nice that the Chelsea Pensioners are keeping good company, and doubtless providing it themselves.

Digging a little bit deeper, Alperton leads for blank ballots - 4.4% and while all of the electors of Bromley -Biggin Hill found something to mark.  Identifying oneself on the ballot paper seems to be a Lambeth vice, at 2.8% in Larkhall and 1.4% in Oval.  Over voting was big in Plaistow South (Newham) - 3.3%, Southall Green (Ealing) - 3.2% and Tottenham Hale (Haringey) - 3.1%
Posted by Quizzical Gazer at 05:01 1 comment:

We live in dark and terrible times - that man Galloway is back in Parliament, hot sausage rolls are VATable, newsreaders wear horrid ties and so on. And now this: 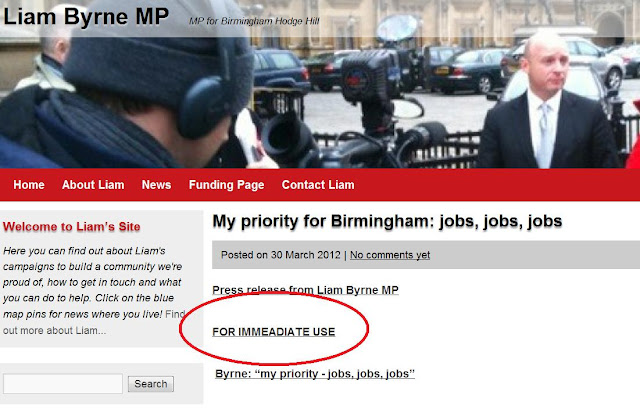 Clearly spelling is no higher than, at best, his fourth priority.
Posted by Quizzical Gazer at 08:29 1 comment: