Pyongyang follies revisited - now it is getting /really/ silly.

This from the KCNA.  I am not, repeat not, making this up:

A natural wonder was also observed around the statue of the President standing on Tonghung Hill.At around 21:20 Tuesday a Manchurian crane was seen flying round the statue three times before alighting on a tree. The crane stayed there for quite a long while with its head drooped and flew in the direction of Pyongyang at around 22:00.Observing this, the director of the Management Office for the Hamhung Revolutionary Site, and others said in union that even the crane seemed to mourn the demise of Kim Jong Il born of Heaven after flying down there at dead of cold night, unable to forget him." 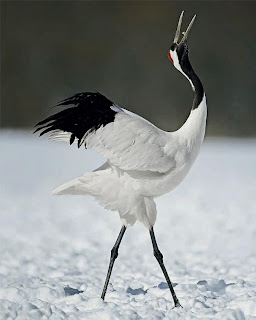 There are also tales of lake ice cracking, temperature drops and strong winds, obviously all related to the death of Kim Jong-Il.

I'll give the first word to Hiliare Belloc:


"Here richly, with ridiculous display,
The Politician’s corpse was laid away.
While all of his acquaintance sneered and slanged
I wept: for I had longed to see him hanged".


In terms of what comes next, his son's taking up of the reins is by no means as clear cut as the media is making out at the moment.  At present, the KCNA English language service is not even reporting the death, let alone the succession   Whoever ends up being the face of DPRK will be utterly beholden to the military - as was Kim Jong-Il.  As such, expect more money to go the military, perhaps a few mortar rounds will get lobbed at the South and possibly something a little more spectacular.  However, I would rule out a full scale invasion of the South, for while the North has the numbers, its equipment is utterly outdated  - it has some 40 Mig 29s, with everything else much, much older.  Equally, the West would defend the South, but I doubt that Beijing has the stomach for a fight, and the DPRK does nothing that goes against Chinese vital interests.

However, whatever we think, Koreans have their own way of doing things, evidenced by this from 'The Dragon and the Foreign Devils':  "In 1866, nine French priests had their heads cut off by the Koreans.  The French Asiatic Squadron under Rear-Admiral Pierre Gustave Roze put a landing party ashore and proclaimed a blockade of...Seoul.  The Koreans refused to take any notice of them, let alone negotiate. The baffled French withdrew to China, having accomplished nothing".


Posted by Quizzical Gazer at 01:35 No comments: