The Arab Spring - what Europe thinks

A French paper has commissioned a poll on the Arab Spring, with the details here at Ifop. Questions were asked in the UK, France, Germany, Spain and Italy.   The findings do not suggest that there is very much cheering on of our neighbours from the sidelines going on.

Asked whether the events inspired fear or hope, the Italians split 76% afraid to 21% hopeful.  The most enthusiastic were the Germans - 48%/45%.  We emerge as Europe's mouth breathers with 22% being unable to muster an opinion (it was 8% in France, the next worst) with 53% scared and 25% hopeful.  Right wingers were more likely to opt for fear over hope in all five countries.

Asked the likely consequences, thee numbe one response was more emigration to Europe, followed by Islamist takeovers.  The Spanish mustered 61% for the arrival of democracy in the region to our 50%  Mind you, perhaps the Spanish have rather more recent memories of strong men running the show and what came afterwards.  Again, right wingers in all countries were the most likely to think an Islamist takeover likely.  Asked where EU money should go, the better off opt for development aid, and the less so for tighter immigration controls.

The post would be incomplete without showing what Ifop does with the Union flag in all the 13 opportunities it had: 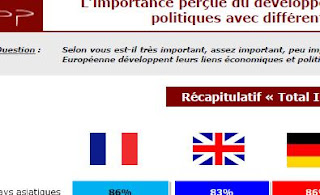 Maybe Ifop is a den of Irish nationalists which refuses to accept the 1800 Act of Union.
Posted by Quizzical Gazer at 05:11