Decorum and basic humanity - the EU shows how not to do it.

And a sense of proportion too: 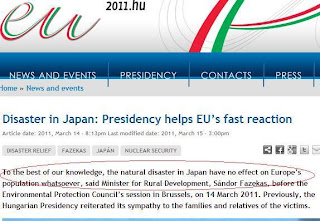 The opening line of the statement from the Hungarian presidency runs thus: "To the best of our knowledge, the natural disaster in Japan have (sic) no effect on Europe's population whatsoever said Minister for Rural Development, Sándor Fazekas".  Granted there is a note about previous expression of sympathies, but even so....

Mind you, over at the Korean Central News Agency, the earthquake / tsunami are noted, the Chairman of the DPRK Red Cross Society extends sympathies to the President of the Japanese Red Cross Society but room is still found to run an item about 'domestic violence [being] rampant in Japan'.

Posted by Quizzical Gazer at 09:07