Our friends in Brussels have just published the first, ahem, 'Parlemeter' of 2011, which looks at awareness levels and the image of the EU 'Parliament' across the 27.

One of the questions is whether MEPs sit by nationality or political allegiance.  Overall awareness that it is the latter is a less than brilliant 42%.  I will grant that it is not wholly ridiculous to think that MEPs might cluster by nationality, but what is unexpected are the changes in level of awareness over the course of last year: 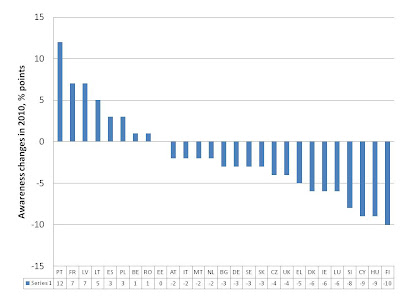 So, 18 countries saw a higher level of incorrect answers than at the start of the year.  I would suggest that +/- 2% represents a fair margin of error, but that still leaves 14 countries with drops of 3%-10%.  So, just what happened in Finland that some 10% of the population saw its awareness going backwards?  Maybe knowledge of the EU 'Parliament' is not the most mission critical item of information in the mind of the average sane person, but I am bewildered by the degree to which knowledge has been lost.  Have evil trolls been spreading disinformation on the streets of Helsinki, perchance?   Mind you, our figure is down 4% on the year too.  At the other end of the scal, something must have stirred up our Portuguese chums as their awareness climbed 12%.  Looking at overall figures, the Dutch are the most up to speed on these things, with 61% knowing it is political allegiance, whereas only 26% of Czechs know that.  Going off at a tangent, it might add to the gaiety of the nation if Westminster MPs sat geographically - Bercow surrounded by Tories, the Ulster MPs sharing bench space, Wirral West's Esther McVey in a sea of red etc etc.

Elsewhere, I am delighted that we Britons are least likely to think that 'democratic' describes the 'parliament' well.
Posted by Quizzical Gazer at 02:37

Email ThisBlogThis!Share to TwitterShare to FacebookShare to Pinterest
Labels: EU fun and games, fun with statistics