I do not suppose many normal people have heard of Niue, but it is a South Pacific island with a degree of sovereignty sheltering under the shield, as it were, of New Zealand.

I am sure that Niueans are generally good sorts, but they do seem to have a bit of a problem with taste.

Exhibit A, the flag of Niue:

I am quite a fan of the saffron hue in other contexts, but not on a flag with red, white and blue, thank you.

That ensign has been fluttering above Niue for more than 35 years, so it is hardly a new offence.

Exhibit B, the currency of Niue: 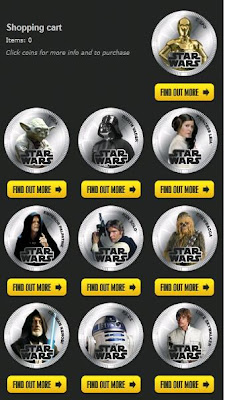 The coins above are legal tender in Niue.  Yes, really: "Each coin in the Star Wars set is struck from Silver Plated base metal. No more than 50,000 of each coin will be issued by the New Zealand Mint. The coins are legal tender of Niue".  I nearly entitled this 'Star Wars - a Niue Hope', but decided against it as it might have attracted the wrong type.


In common with novelty stamps, the authorities are not expecting anyone to actually use the things but rather are counting on Star Wars / numismatics 'enthusiasts' (1) to put them in a drawer or - if bolder in the face of mockery - to display them.

Where it gets even more amusing is the obverse:  "The obverse of the coin features The Raphael Maklouf effigy of Her Majesty the Queen Elizabeth II sovereign of the commonwealth of Niue".

Readers are in with a sporting chance of having a Raphael Maklouf lurking in a pocket / handbag.  It is the portrait of Mrs Battenberg Saxe Coburg Gotha where she only looks 30 years younger than her then current age, rather than the prior 50 or the current 20.

A bit of digging reveals that Niueans find God in the following ways:

So, there could be some Jedi Knights lurking beneath the palm trees.


(1) I would use a stronger word, but I believe sci-fi fanboys react to criticism of their doings almost as strongy as dog lovers do, and I could do without the grief.

Posted by Quizzical Gazer at 06:30